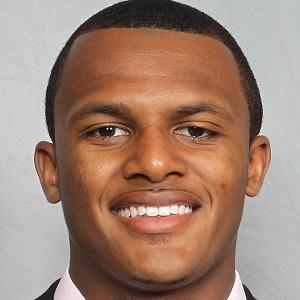 Quarterback who led the Clemson University Tigers to an NCAA National Championship in 2016-17. He also led the team to the championship game in 2015-16. He was a Heisman Trophy finalist both seasons. He was selected 12th overall in the 2017 NFL Draft by the Houston Texans.

He was a USA Today All-American at Gainesville High School in Georgia.

His mother's name is Deann Watson and he has four siblings. He began dating Jilly Anais in July 2019.

He played under head coach Dabo Swinney at Clemson.

Deshaun Watson Is A Member Of