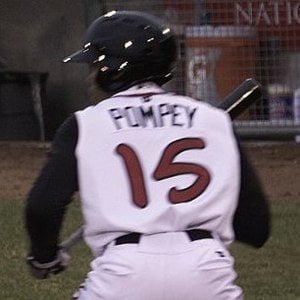 Baseball outfielder who became the sixth Ontario native to play for the Toronto Blue Jays when he appeared in a game in September of 2014. He was ranked a Top 10 outfield prospect in 2015.

He was a 16th round pick in 2010 and spent five years in the minor leagues before making his MLB debut.

He won a Gold Glove award while playing in the minors in 2013. He hit his first MLB homerun off Mariners ace Felix Hernandez.

He was born to Ken and Valerie Pompey and grew up with two siblings. His younger brother, Tristan, was drafted in the 31st round in 2015, but decided to attend the University of Kentucky instead.

He hit two triples in a game as a rookie, becoming the second Blue Jay after Alex Rios to accomplish the feat.

Dalton Pompey Is A Member Of