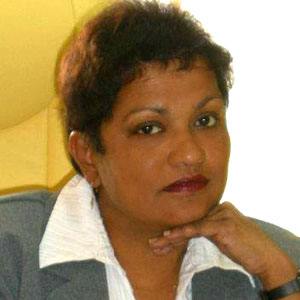 Independent Party politician, attorney, and member of the Trinidad and Tobago Senate. Also a legal writer, she published "The effects of Urbanization and Industrialization on Crime: The Commonwealth Caribbean in the 1990s" and numerous other articles.

She graduated in the 1970s from both the University of the West Indies and the Hugh Wooding Law School.

After completing post-graduate criminology coursework at both the University of Minnesota and Florida State University, she became a criminal law professor at the Hugh Wooding Law School.

She and her ten siblings were the children of Sarjudeya and Latchman Seetahal.

Like her political contemporary, Colombian Senator Luis Carlos Galan, she was assassinated. She was killed in Port of Spain, Trinidad, at the age of fifty-eight.

Dana Seetahal Is A Member Of