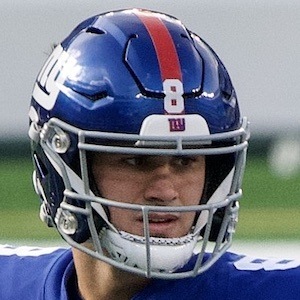 Quarterback who was selected 6th overall in the 2019 NFL Draft by the New York Giants. He played college football at Duke University and was the team's starting quarterback from 2016 to 2018.

He was an unranked high school recruit coming out of Charlotte Latin School, where he threw for nearly 7,000 yards and 98 touchdowns.

He was named MVP of the 2019 Senior Bowl where he threw for a touchdown and ran in a touchdown.

His parents' names are Rebecca and Steve and he has three siblings named Ruthie, Becca and Bates.

He became teammates with fellow quarterback Eli Manning on the Giants in 2019.

Daniel Jones Is A Member Of