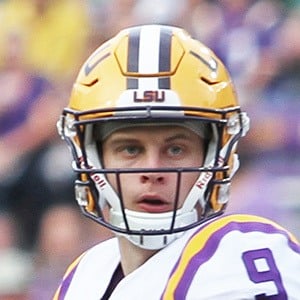 Quarterback who won the 2019 Heisman Trophy after a dominant senior year with the LSU Tigers in which he led the team to an undefeated season and a national title. He was selected first overall in the 2020 NFL Draft by the Cincinnati Bengals. He helped lead the Bengals to a Super Bowl appearance at Super Bowl LVI in 2021-22, but the team was defeated by the Los Angeles Rams.

He originally committed to Ohio State University to play football. He redshirted as a freshman, and served as a back-up his next two years before transferring to LSU in the spring of 2018.

During his junior year at LSU, he led the Tigers to a Fiesta Bowl victory over Central Florida and was named MVP of the game.

His parents' names are Robin and Jim. Olivia Holzmacher became his girlfriend.

He has played for coach Ed Orgeron for the LSU Tigers.

Joe Burrow Is A Member Of