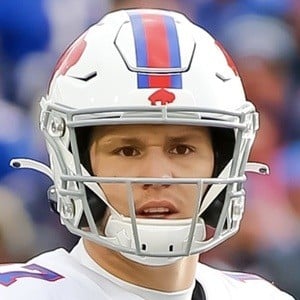 First round selection of the Buffalo Bills in the 2018 NFL draft selected 7th overall to be the new franchise quarterback. He became known for his big arm after a strong college career at the University of Wyoming.

He grew up on a farm that was established by his paternal grandfather in 1975. He was a Fresno State fan in his youth.

He was Second Team All-Mountain West in 2016.

His family emigrated from Sweden. He worked at a restaurant his mother operated in his birth city.

He was part of a quarterback heavy first round in the 2018 draft, and was drafted just behind Baker Mayfield and Sam Darnold.

Josh Allen Is A Member Of