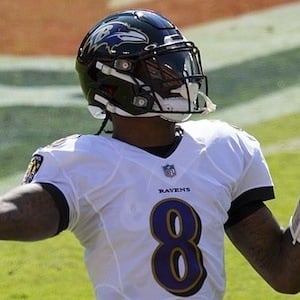 Dynamic quarterback who was a unanimous selection as 2019 NFL MVP after a historic season with the Baltimore Ravens. He was the 2016 Heisman Trophy winner at Louisville and was selected 32nd overall in the 2018 NFL Draft by the Ravens.

He played high school football for Boynton Beach High School, where he won the Lou Groza Award for High School Player of the Year.

During his 2019 MVP season, he became the first player in league history to total over 3,000 passing yards and over 1,000 rushing yards in a season.

He was born to Felicia Jones and Lamar Jackson Sr.

He became teammates with star running back Mark Ingram Jr. on the Ravens.

Lamar Jackson Is A Member Of