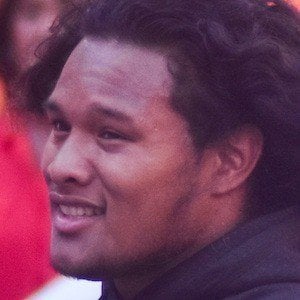 American football defensive lineman who was taken in the first round of the 2015 NFL Draft by the Cleveland Browns.

He was a member of the track & field team in his high school, throwing discus and shot put, and spent two seasons doing track & field in college. He played his college football at the University of Washington after being a four-star recruit in high school. He was named a first-team All-Pac-12 member in his senior year.

When Roger Goodell announced the selection, the 6'2" 335-plus lb. player hugged the commissioner and lifted him off the ground.

He's of Samoan heritage, from his mother Oneone's side, and has several tribal tattoos. He has four siblings.

In his rookie year with Cleveland, he played alongside Desmond Bryant, who led the team with six sacks.

Danny Shelton Is A Member Of