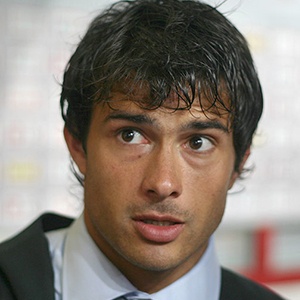 Argentine professional football player who is known for his work as a forward and striker for the Banfield club. He is also known for having played professionally with the Miami FC and Nice Football Club.

He first started his career with the Club Atletico Banfield youth program. He then joined their professional first team at the age of 19. He then joined the Ajax club in 2008 and was loaned out to Pachuca in 2010 and Boca Juniors in 2011.

He has earned several honors and awards for his playing including the Argentine Primera Division Clausura: Top Goalscorer during the 2007-2008 season with the Banfield club.

While he was born in Baradero, Argentina, he holds dual citizenship with Argentina and Croatia due to his parents.

He played alongside Claudio Bravo and Emanuel Cecchini as part of the Club Atletico Banfield squad during the 2018 season.

Dario Cvitanich Is A Member Of