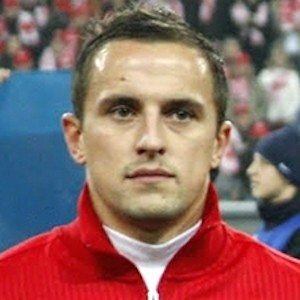 Polish midfielder and defender who earned 65 caps during his international career, which spanned from 2004 to 2012. Domestically, he's spent the majority of his career in the Ekstraklasa.

He grew up playing soccer with Celuloza Kostrzyn and Amica Wronki. He made his professional debut in 2000 with Amica.

He spent four years in Ligue 1 with Auxerre from 2008 and 2012. After short stints in the Championship and La Liga, he returned to the Ekstraklasa in 2014.

He grew up in Kostrzyn nad Odra, Poland.

He and Nicki Bille Nielsen have played together on Lech Poznan.

Dariusz Dudka Is A Member Of