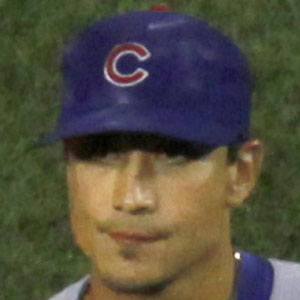 Major league second baseman who won a Gold Glove in 2012 with the Chicago Cubs.

He played baseball at Southridge High School in Oregon and led the school to its first state championship in 2002.

During the 2012 season, he tied the MLB record for consecutive games without an error at second base, 141 straight.

Barney and his wife Lindsay have three daughters, Hayden, Zoey, and Devy, and a son, Noah.

His Gold Glove was the first for a Cubs second baseman since Hall-of-Famer Ryne Sandberg won his final one in 1991.

Darwin Barney Is A Member Of