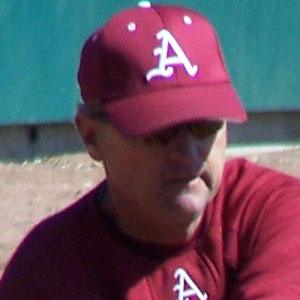 College baseball coach who began coaching the Arkansas Razorbacks in 2002. He took the job after being named the Big 12 Conference Baseball Coach of the Year while at the University of Nebraska the previous year.

He was named Region 5 Player of the Year while playing baseball at McLennan Community College.

He won the SEC title with the Razorbacks in 2004 and was named SEC Coach of the Year.

He married Karen Lee, with whom he has daughters named Hollan and Mariel.

He coached future major league pitcher Drew Smyly at the University of Arkansas.

Dave Van Horn Is A Member Of