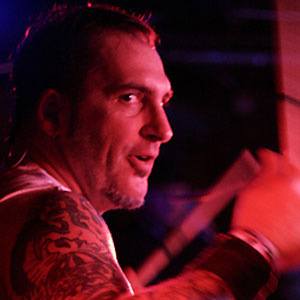 Drummer with the punk rock band Lagwagon and the cover band, Me First and the Gimme Gimmes.

He played the drums with several other bands before getting his first official gig in 1992 with the hardcore punk band Rich Kids on LSD.

He drummed for Hot Water Music and Black President.

He and Lagwagon lead vocalist Randal Cape, along with musicians from NOFX, Swingin' Utters, and Foo Fighters, joined forces to create Me First and the Gimme Gimmes.

Dave Raun Is A Member Of