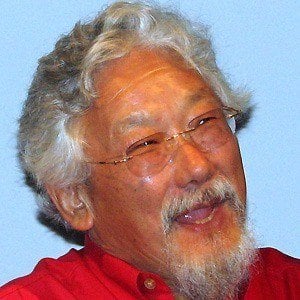 Zoologist and environmental activists who hosted the Canadian series The Nature of Things. He earned the Order of Canada award in 1976 and 2006 and he has been a long time advocate for legislation that might counteract climate change.

He and his family suffered were interned in British Columbia from early during the Second World War until after the war ended in 1945.

In 2004 he was voted the fifth greatest Canadian by viewers of the CBC.

He married his second wife Tara Cullis in 1972, after his 7-year marriage to Setsuku Sunahara ended in 1965.

He presented a three-part special on the life of Charles Darwin called "Darwin's Brave New World."

David Suzuki Is A Member Of