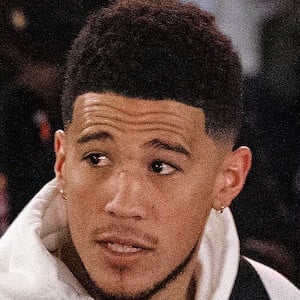 Shooting guard who helped the University of Kentucky Wildcats win 38 straight games in 2014-15 before falling to Wisconsin in the Final Four. He was selected 13th overall in the 2015 NBA Draft by the Phoenix Suns. He set the Suns franchise record when he scored 70 points in a game in 2017.

He played the majority of his high school ball at Moss Point High School in Mississippi after a short career at Grandville High School in Grand Rapids, Michigan.

He played in the Nike Elite Youth Basketball League and trained at the Elite 100 Camp, the LeBron James King's Academy Camp, and the Kevin Durant Nike Skills Camp.

His father Melvin Booker played professional basketball internationally. His mother's name is Veronica Gutierrez. He has an older brother named Davon and a younger half sister named Mya. He dated Jordyn Woods in 2018. In 2020, he began a relationship with Kendall Jenner.

He was selected one pick after Kentucky teammate Trey Lyles at the 2015 NBA Draft.

Devin Booker Is A Member Of