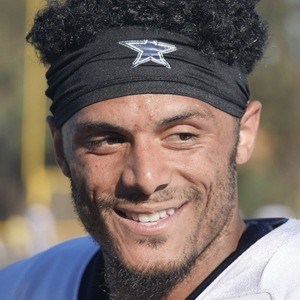 Wide receiver who helped the Ohio State Buckeyes win the inaugural College Football Playoff Championship in 2015. He compiled 121 receptions for 2,503 yards and 30 touchdowns during his four years at Ohio State. He was selected 37th overall in the 2015 NFL Draft by the New York Jets.

He starred in football, basketball and track at Massillon Washington High School.

He was born to Atina Smith and Andre Simpson.

He and quarterback Cardale Jones helped lead the Buckeyes past Alabama and Oregon on the way to their 2015 National Championship.

Devin Smith Is A Member Of