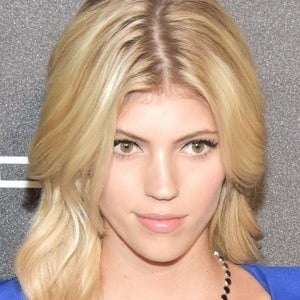 IMG-represented model notable for her participation in Prada's and Victoria's Secret's 2013 fashion shows. She is also famous for her runway work for Alexandre Vauthier, Jason Wu, Tory Birch, and numerous other designers.

She began modeling at the age of fourteen. Early in her career, she was photographed for the international fashion magazine Oyster.

In 2018, she began starring in the E! dock-series Model Squad. She is extremely popular on Snapchat under the username devwindsor. She primarily posts contest based around wild cats.

She was raised in St. Louis, Missouri and later lived and worked in both Los Angeles and New York City. In September 2021, she and her husband Jonathan Barbara welcomed a daughter named Enzo Elodie Barbara.

In 2015, she was featured in a Pierre Balmain fashion campaign.

Devon Windsor Is A Member Of