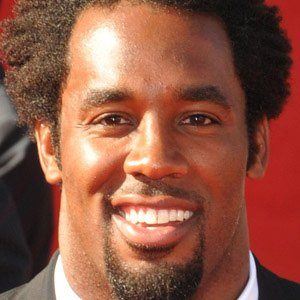 Former NFL linebacker who played for the New York Giants, the Philadelphia Eagles, and the Cincinnati Bengals. He appeared in Super Bowls with both the Giants and Eagles.

He played basketball at Cabin John Middle School in Potomac, Maryland and played college football at the University of Michigan.

He became the host for Dhani Tackles the Globe on the Travel Channel following his retirement.

He was an All-Met, All-Western Region, All-Country pick during his senior year at Winston Churchill High School in Potomac.

He left the Giants just as Eli Manning was about to be drafted by the team.

Dhani Jones Is A Member Of