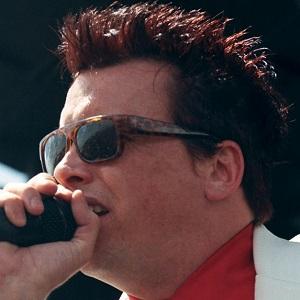 Lead singer of the legendary ska punk band The Mighty Mighty Bosstones who is known for his distinctive raspy voice. He later became the announcer for Jimmy Kimmel Live!

He played in local Boston bands before joining The Bosstones. The band's debut album called Devil's Night Out came in 1989.

He hosted his own radio show in Los Angeles called The Mighty Morning Show from 2005 until March 2006.

He was born in Providence, Rhode Island and attened junior high school in Massachusetts.

He was a guest on Adam Carolla's podcast in April of 2009 and was a regular guest on Adam's former show Loveline.

Dicky Barrett Is A Member Of