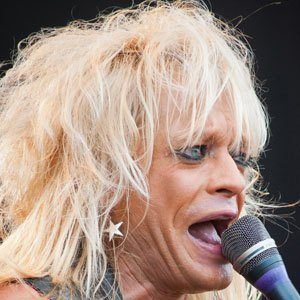 Lead singer for the glam punk band Hanoi Rocks both in the original 1980s band and the reformed group in 2002. He has also worked on side projects like Demolition 23.

He grew up idolizing artists like The New York Dolls, Led Zeppelin, and Alice Cooper.

Known for his bleached blonde hair and makeup with Hanoi Rocks, he kept the look throughout his two-decade solo career.

His father Pentti Fagerholm was a renowned Finnish radio reporter. He married twice; his first wife, Jude, passed away from an intracranial hemorrhage and he got remarried in 2003 to his second wife, Johanna.

He recorded several duets with Axl Rose, the singer of Guns N' Roses, and played saxophone on a few of their tracks.

Michael Monroe Is A Member Of