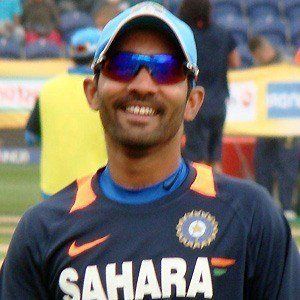 Wicketkeeper-batsman who made his debut for the Indian cricket team in 2004 and has been criticized for his inconsistent glove-work.

He played as a batsman for the Tamil Nadu youth teams.

He has taken part in the dance reality show Ek Khiladi Ek Hasina.

His father Krishna Kumar was a first-division cricketer from Chennai. He married Dipika Pallikal in 2015.

He was complimented by Robin Singh for having a very high level of physical fitness.

Dinesh Karthik Is A Member Of