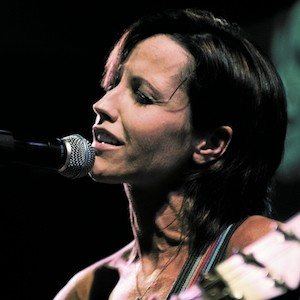 Irish singer-songwriter and musician best known as the lead singer of the band The Cranberries, whose hits include "Linger," "Dreams" and "Zombie." She also performed with the alternative rock band D.A.R.K. in 2014.

She started singing at pubs at the age of 10 under her uncle's supervision. She attended Laurel Hill Coláiste FCJ. She joined The Cranberries in 1989 after leaving her home.

She performed at the Vatican Christmas Concert for Pope John Paul II in 2001 and for Pope Francis in 2013. She was a guest star on a 1999 episode of the series Charmed.

She was married to former Duran Duran tour manager Don Burton from 1994 until 2014. They had three children: Taylor Baxter, Molly Leigh, and Dakota Rain.

Adele, Florence Welch and Halsey have all named her as one of their major musical influences.

Dolores O'Riordan Is A Member Of