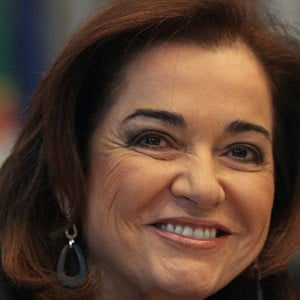 Greek politician who is recognized for having served as both the Minister for Foreign Affairs as well as the Mayor of Athens. She is a member of the New Democracy party and has also served as Minister for Culture from 1992 until 1993.

She attended the Ludwig Maximillian University of Munich where she earned her degree in Political Science and Communication. She then studied Public Law at the National and Kapodistrain University of Athens. In November of 1989, she entered politics when she was elected as a member of the Hellenic Parliament within the Evrytania constituency.

She received a cope of the Key of the city of Tirana after her visit to Albania in March of 2008.

She married Isidoros Kouvelos in 1998 and together they have two children named Alexia and Kostas. She is also the daughter of former Prime Minister of GReece Konstantinos Mitsotakis.

She travelled to the United States in 2009 where she met with Secretary of State Condoleezza Rice.

Dora Bakoyannis Is A Member Of