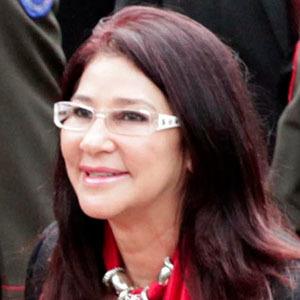 Rose to fame as the First Lady of Venezuela upon her husband Nicolás Maduro assuming office as president in April 2013. She also served as the President of the National Assembly between 2006-2011.

She was a practicing lawyer before turning to politics. She represented Hugo Chávez during his 1992 trial following his failed coup to seize governmental control.

She has represented the United Socialist Party of Venezuela in the Member of the National Constituent Assembly. She served as the Attorney General of Venezuela between 2012-2013.

Two of her nephews were found guilty of narcotics trafficking to the US. Her family has been mired in controversy while holding office.

She was sanctioned alongside her husband Nicolás Maduro in 2018 by the US and Canada.

Cilia Flores Is A Member Of