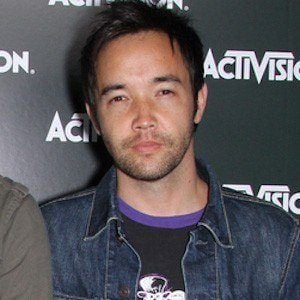 Rock singer who is best known as being the lead vocalist for the band Hoobastank. He and his bandmates have sold over 10 million records worldwide, and are largely known for their 2003 album The Reason and its titular single. The album and song earned the band two Grammy Award nominations.

He began playing the guitar at age 15. He met his fellow bandmates Chris Hesse and Dan Estrin while the three were still high school students.

In 2001, he and the band released their self-titled album, which earned a platinum certification. It also yielded he and the band's three breakout singles "Crawling in the Dark," "Remember Me" and "Walk Away."

He is of half-Scottish and half-Japanese descent. His brother James works in the film industry.

He and Hoobastank appeared alongside Amy Lee's Evanescence on the Daredevil (2003) film soundtrack.

Douglas Robb Is A Member Of