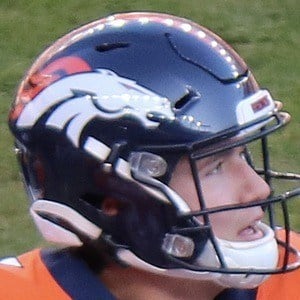 Four year quarterback at the University of Missouri who was drafted in the second round of the 2019 NFL Draft by the Denver Broncos. After a spell on injured reserve during his rookie season, he was named a starter for a game against the Los Angeles Chargers in which they won on a game-winning field goal.

During his senior year of high school, he was the Kansas City Star's All-Metro Player of the Year. He was a four-star recruit out of high school.

In 2017, he was the FBS passing touchdowns leader. He was first-team all-SEC that season.

His father Andy was an offensive lineman for Missouri. His mom's name is Laura.

He threw passes to Courtland Sutton during his first season in the NFL.

Drew Lock Is A Member Of