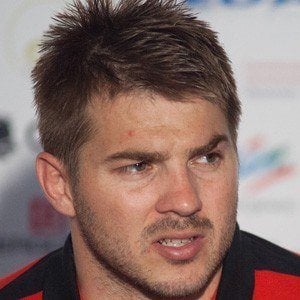 Australian fullback and wing who played on the Waratahs from 2010 to 2013 after previously playing for the Reds and the Western Force.

He played in the 2011 Rugby World Cup after playing impressively with Western Force.

He was born in Liverpool, Australia.

He briefly played alongside Quade Cooper for the Reds in 2006.

Drew Mitchell Is A Member Of