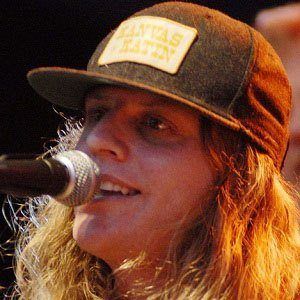 Vocalist and guitarist for the reggae, hip hop, and ska punk infused band Dirty Heads, who is also known by the name Duddy B. The group's 2008 breakout album is titled Any Port In the Storm and they released summer 2014 album called Sound of Change.

He co-founded the band in 1996 with Jared Watson, AKA Dirty J, in Orange County, CA. He previously played in a punk rock band before co-founding Dirty Heads.

He is joined in Dirty Heads by Jon Olazabal, Matt Ochoa, David Foral and Shawn Hagood.

He was born in Los Angeles, California. He has a daughter named Sophia and a son named Jack with his wife Rachel Rivera.

His band's chart-topping hit track "Lay Me Down" featured Rome who would become the frontman of the revived ska punk group Sublime years later.

Dustin Bushnell Is A Member Of