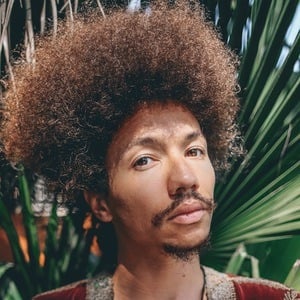 Soul-folk singer-songwriter who has become known touring internationally. He has also over a dozen albums on his website and Bandcamp, including 2017's Year In Review. He has shared the stage with the likes of Trevor Hall, Michael Franti, and Xavier Rudd, among others.

He grew up singing in the church and walked to work several miles a day as a teenager. He started working at the Bayfront Kava Bar in Hilo, Hawaii with Nahko Bear, whom he has also shared the stage with.

He has toured throughout the U.S. and internationally throughout Australia, Indonesia, Russia, and Europe, performing over 1000 shows worldwide.

He was raised on a farm​​ and is of Irish and Native American and East African descent. His mother worked as a nurse and bought him his first guitar.

He is close friends with Corey Harper and has written songs with Cody Simpson.

Dustin Thomas Is A Member Of