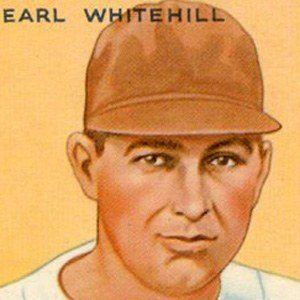 MLB pitcher who won 218 games during his 17-year career with the Detroit Tigers, Washington Senators, Cleveland Indians and Chicago Cubs.

He was discovered by a baseball scout who happened to live in the same city he grew up in.

He began his career playing for famed slugger Ty Cobb with the Detroit Tigers.

He had a daughter named Earlinda with his wife Violet.

He gave up 11 home runs to Babe Ruth.

Earl Whitehill Is A Member Of