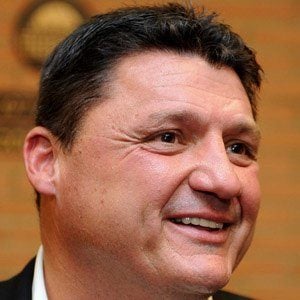 Football coach who took over as head coach at LSU in 2016 and led the team to an undefeated season and a national title in 2019. He also worked as a defensive coordinator for the USC Trojans from 2010 to 2013 and served as head coach of the Mississippi Rebels from 2005 to 2007.

He briefly appeared in the film The Blind Side.

He had three children with his wife Kelly. The couple separated in 2020.

He served as assistant coach for USC while Pete Carroll was the head coach.

Ed Orgeron Is A Member Of