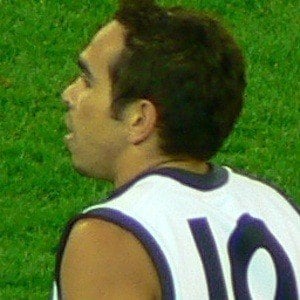 Australian rules footballer who played for Carlton from 2005 to 2013 and signed with Adelaide in 2014. He was named to his first Indigenous All-Stars team in 2007.

He played for Templestowe in EFL Division 3, where he received the Best and Fairest award in 2002.

He won the Goal of the Year award for his spectacular goal against Collingwood in 2006.

He married Anna Scullie in August 2015; they have four children: Lewis, Billy and twins, Alice and Maggie.

He was teammates on the Australian team with Chris Yarran in the 2013 International Rules Series.

Eddie Betts Is A Member Of