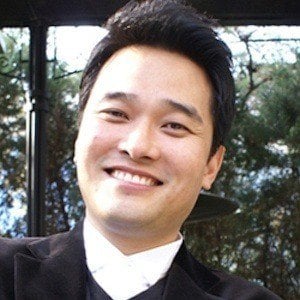 Korean celebrity chef widely known as the host of his cooking show Yes Chef. He is also well remembered for his work in luxury hotels around the world in the United States, China, and the Middle East. He released the cookbook Cooking Seven Stars in 2009.

He first pursued his education at Gangneung Yeongdong College. Thereafter she began an internship at the Ritz-Carlton in Seoul, South Korea.

He has served as the head chef of the W Hotel in Seoul and the Burj al-Arab Hotel in Dubai. He also owns Eddie's Cafe in Gangnam, Korea, The Mixed One in Hannam-dong, and Lab XXIV in Cheongdam.

He was raised in Gangneung, South Korea and has two sons named Aaron and Chase.

Much like Mario Batali, he is a popular celebrity chef.

Edward Kwon Is A Member Of