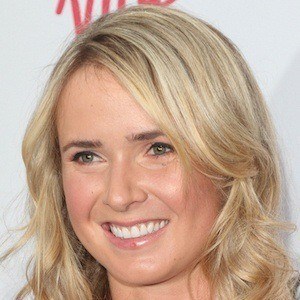 Ukrainian tennis pro who made her WTA Tour top 10 debut in February 2017. She spent the beginning of 2017 as the #1 ranked Ukrainian female tennis player on the WTA Tour.

She turned professional in 2010 following her win at the French Open girls event.

She became the first teenager since 2012 to win a WTA title following her win at the 2013 Baku Cup. She advanced to the quarterfinals at the 2016 Rio Olympics.

Her parents' names are Olena and Mikhaylo. She has been in a relationship with fellow tennis player Gael Monfils.

She defeated then-world number 1 tennis star Serena Williams during her run at the 2016 Rio Olympic games.

Elina Svitolina Is A Member Of