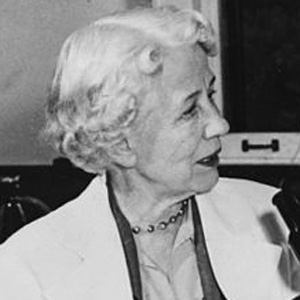 Co-inventor, by correspondence with Rachel Fuller Brown, of the antibiotic and antifungal Nystatin. She was inducted into he National Inventors Hall of Fame in 1994 and her research has been used to save infected trees and restore paintings with mold damage.

A quick study from her earliest days, she graduated from the Mississippi Industrial Institute and College, and became one of the first female doctorate students Columbia University.

She and Brown both agreed to donate the royalties from their invention, some $13 million, to the nonprofit Research Corporation for the advancement of academic scientific study.

Born to William Edgar Hazen and Maggie Harper Hazen, she was raised by her uncle after both her parents died.

She and Rachel Fuller Brown were both inspired by earlier scientific work with penicillin, and saw a need for a fungal fighter.

Elizabeth Lee Hazen Is A Member Of