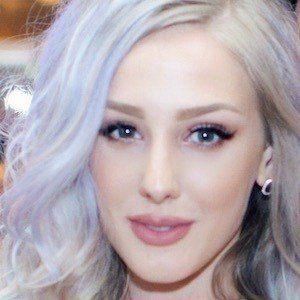 Self-taught special effects makeup artist and schooled beauty stylist who co-owns Ellimacs SFX Makeup alongside Macs Moser. She demonstrates cost-efficient and approachable DIY methods of applying special FX makeup for her more than 1 million subscribers on YouTube, and publishes photos of her work for her 310,000 Instagram followers.

She and her partner Macs met by accident in February of 2013 after a friend of Elli was booked in Macs studio. Unable to make it, the friend of Elli would wind up sending Elli instead and the two hit it off right away.

She worked as a makeup artist on the 2015 film Sensoria and 2016 movie Origin. She acted in a 2013 film called Madness of Many. She became the winner of the first ever Nordic Face Awards in 2016 and went on to host the Nordic Face Awards 2017.

She was born in Skane County, Sweden and grew up alongside a younger sister and brother.

One of her tutorials showcased how to do the makeup of Voldemort as portrayed by actor Ralph Fiennes in the Harry Potter film series.

Ellinor Rosander Is A Member Of