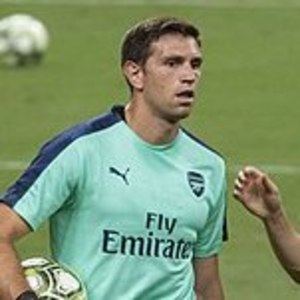 Argentinian goalkeeper who is widely known for his career with English Premier League club Arsenal. He debuted with the club as a professional in September 2012.

He began his youth career in 2008 with Club Atlético Independiente. He later signed with Arsenal in 2010, and played for their youth club until 2012.

He spent the 2015 season on a season-long loan to the Wolverhampton Wanderers in the English Championship League.

He was born and raised in Mar Del Plata, Argentina.

In 2015, he played as a substitute behind Petr Cech for Arsenal.

Emiliano Martínez Is A Member Of