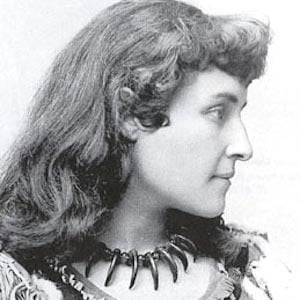 Canadian poet, author, and performer known for her popular poem "The Song My Paddle Sings." Her noteworthy poetry collections include The White Wampum, Flint and Feather, and Canadian Born.

She was educated mostly at home, but studied for a time at Brantford Central Collegiate. She began her stage career during the 1880s.

She died of breast cancer, and her memorial service was held in Vancouver on her fifty-second birthday.

She was the daughter of a Mohawk chief and an English immigrant mother, and this dual heritage greatly influenced her work.

She created her Mohawk-tribe-inspired performance pieces during the same era when Buffalo Bill Cody was touring his popular Wild West show.

Emily Pauline Johnson Is A Member Of