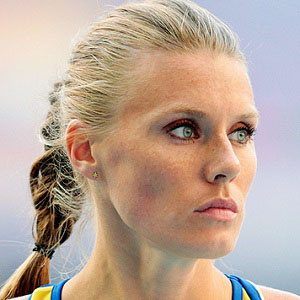 Swedish track and field athlete who has medalled in the high jump at competitions like the IAAF World Championships in Athletics, European Athletics Championships and IAAF Continental Cup. She has also won Swedish national titles in the 100-meters, 200-meters and long jump.

She grew up in Gothenburg, Sweden and graduated from gymnasium in 2003. She first gained major attention by winning bronze in the high jump at the 2005 World Championships.

In response to Russia's ban on LGBT "propaganda," she painted her nails rainbow colors at the 2013 World Championships in Moscow.

She was married to her coach, Yannick Tregaro, from 2011 to 2014. She has a younger brother named Erik.

She finished just behind Croatia's Blanka Vlasic at the 2010 European Athletics Championships.

Emma Green Tregaro Is A Member Of