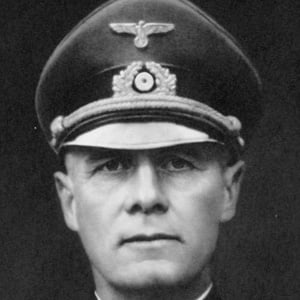 German Field Marshal who was known as 'the Desert Fox' and commanded Axis troops in the WWII North African Campaign. He reportedly ignored all orders to kill Jewish civilians and soldiers and was likely involved in a conspiracy to assassinate Adolf Hitler.

He built a working, full-scale glider that could travel short distances when he was fourteen years old.

He and the German troops under his command were never accused of Nazi war crimes. Hitler ordered Rommel to commit suicide by ingesting a cyanide pill; in return, the Nazi Fuhrer assured Rommel that his family would escape persecution.

He married Lucia Maria Mollin in November of 1916, and the couple had one son.

Erwin Rommel Is A Member Of