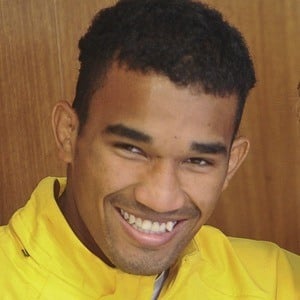 Brazilian boxer who is known for competing in the Middleweight division with a Southpaw stance. He is known for having represented Brazil in several Olympic Games and World Amateur Championships. He is also known for sharing promotional and training related content to his Instagram for his over 140,000 followers.

He began competing as an amateur fighter early on and earned recognition when he earned the bronze medal at the 2011 World Amateur Boxing Championships. After his success, he was given the opportunity to compete in the 2012 Olympics. His professional career first began in February of 2014 with a fight against Joshua Robertson.

He qualified for the 2012 Olympic Games where he went on to earn the silver medal. His win made him the first Brazilian to reach an Olympic boxing final.

He was born and raised in Vitoria, Espirito Santo, Brazil.

He defeated Anthony Ogogo during the 2012 Olympics in order to compete in the finals.

Esquiva Falcao Is A Member Of