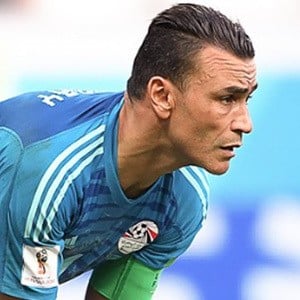 Goalkeeper who made more than 150 international appearances for Egypt, winning four Africa Cup of Nations tournaments. At the club level, he spent the majority of his career at Al Ahly Sporting Club, where he played from 1996 to 2008.

He was signed by the Second Division club Damietta at age 17.

He was ranked sixth on Bleacher Report's 50 Greatest African Players of All Time list in 2013.

He played alongside Ahmed Elmohamady at the 2018 FIFA World Cup.

Essam El-Hadary Is A Member Of