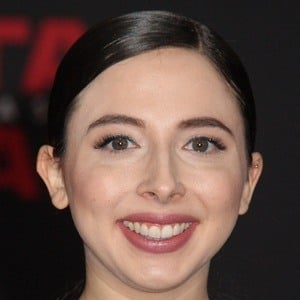 Nicknamed Little Esther, she is a podcast host and standup comedian known for voicing a number of popular comedy podcasts including Little Esther's Piecast, Brode & Esther with Brody Stevens, and Weird Adults with Little Esther. She also created and starred in Freeform's Alone Together in 2018.

After studying at the University of Illinois at Urbana-Champaign, she threw herself into full time acting and standup, taking classes at iO Chicago, Second City, and Groundlings.

In 2012, she turned down an offer by MTV to create a reality show based on her life, citing that it felt too invasive. She appeared on the TV show Dollface.

She was the first female guest on the podcast the Joe Rogan Experience.

Esther Povitsky Is A Member Of