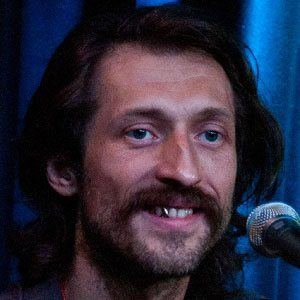 Famous for his work in the Gypsy punk music genre, he fronted the New York-based band Gogol Bordello. His albums with the group include Pura Vida Conspiracy, Trans-Continental Hustle, and Multi Kontra Culti vs. Irony.

He served as the DJ for an experimental music group called Judisch-Ukrainische Freundschaft (J.U.F.).

Born Yevgeniy Aleksandrovych Nikolayev to a family of Ukrainian, Russian, and Romani heritage, Hutz spent the first two decades of his life in the Ukraine, Italy, Austria, Hungary, Poland, and the United States.

He and Elijah Wood co-starred in the 2005 film Everything Is Illuminated. Hutz and his bandmates also wrote a song -- "Start Wearing Purple" -- for the movie's soundtrack.

Eugene Hutz Is A Member Of