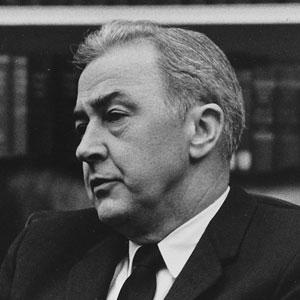 Senator from Minnesota from 1959 to 1971 who sought the Democratic nomination for president in 1968 on an anti-war platform. He was also an accomplished writer who published a collection of poetry entitled Cool Reflections: Poetry For The Who, What, When, Where and Especially Why of It All.

He spent nine months at a monastery as a novice and became deeply influenced by the monks.

President Bill Clinton gave his eulogy after he died of complications from Parkinson's disease.

He separated from his wife of 24 years in 1969 and began a long-term affair with journalist, Marya McLaughlin.

He was a well-known Minnesota-born politician like Walter Mondale.

Eugene McCarthy Is A Member Of