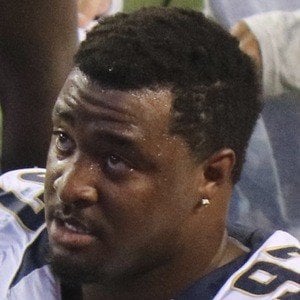 NFL defensive end who was a sixth round draft pick of the St. Louis Rams in 2010. He signed an extension with the team in 2013, after contributing four sacks between the 2012 and 2013 seasons.

He was recruited by West Texas A&M University after playing football and track&field at Mize High School.

He had 7 sacks and 13.5 tackles for a loss during his senior season, which led to his second consecutive Lone State Conference Defensive Lineman of the Year award.

His mother Jeanelle passed away in 2013.

He was a sixth round pick for the Rams in 2010, Sam Bradford was the team's first round selection.

Eugene Sims Is A Member Of