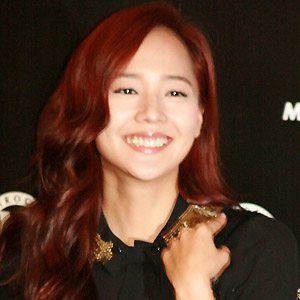 Born Kim Yoo-jin and known by the stage name of "Eugene," this South Korean pop singer belonged to a late 1990s, all-female vocal group called S.E.S. (Sea, Eugene, Shoo) and also recorded solo K-pop albums in 2003 and 2004. Also an actress, she starred in such Korean films as Yoga and Heartbreak Library.

In her teens, she signed a contract with the SM Entertainment record label.

She starred in a 2008 KBS2 series titled One Mom and Three Dads.

Though born in Seoul, South Korea, she spent the majority of her childhood in Guam. In 2011, she married her Creating Destiny television co-star Ki Tae-young. In April of 2015 they welcomed a daughter named Ro-hee.

She co-starred with Lee Bo-young in a Seoul Broadcasting System (SBS) series called Save the Last Dance for Me.

Eugene Is A Member Of