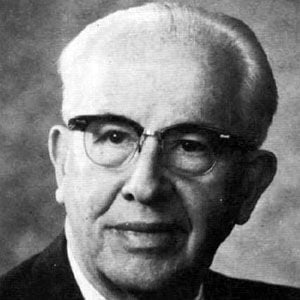 Perhaps best remembered as the United States Secretary of Agriculture during the presidential administration of Dwight D. Eisenhower, this Idaho-born Republican also served for nearly a decade as President of The Church of Jesus Christ of Latter-day Saints (the Mormon church).

After completing his undergraduate education at Brigham Young University, he earned a graduate degree from Iowa State University. In the late 1930s, he served as the National Council of Farmer Cooperatives' Executive Secretary.

An advocate of the Boy Scouts of America, he served on the organization's National Executive Board.

He and his ten younger siblings grew up on an Idaho farm. His nearly seven-decade marriage to Flora Smith Amussen Benson resulted in two sons and four daughters.

Ezra Taft Benson Is A Member Of