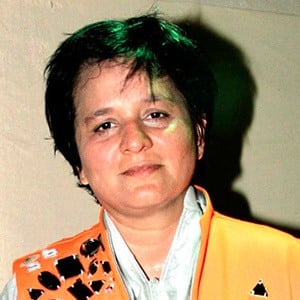 Singer, performance artist, and composer who is known for her traditional style of music inspired by the state of Gujarat. She is known for playing with the band Tha Thaiyaa and for also having her music appear in a variety of Bollywood films.

She released her debut album in 1998. She gained further popularity with the release of her hit singles "Chudi jo Khanki Haath Ma" and "Maine Payal hai Chhankai".

She is also known for her television appearances including in the series' Taarak Mehta Ka Ooltah Chashmah and Kaun Banega Crorepati.

She was born and raised in Mumbai, Maharashtra, India.

She starred alongside Dilip Joshi and Disha Vakani when she appeared in the sitcom Taarak Mehta Ka Ooltah Chashmah.

Falguni Pathak Is A Member Of