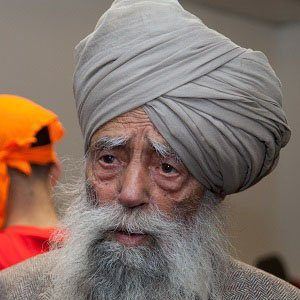 Famous as both a supercentenarian and a champion runner, he claimed numerous United Kingdom and world records for his running times in the over-ninety-years-old age category. Impressively, he finished Toronto's 2003 Waterfront Marathon in just over five and a half hours and ran the same year's London Marathon in just six hours and two minutes.

Born with weak lower limbs, he was not able to walk until just after his fifth birthday. He built up his strength and began running in his early adulthood years but did not become a competitive racer until he was in his eighties.

He ran in his last race, the 2013 Hong Kong Marathon, when he was 101 years old, finishing in just over an hour and a half.

He and his three older siblings were raised in Punjab, British India. Grieving the deaths of his wife, son and daughter (all during a two-year period in the early 1990s), he turned to running for solace.

He and soccer star David Beckham both made appearances in a 2004 Adidas advertising campaign.

Fauja Singh Is A Member Of